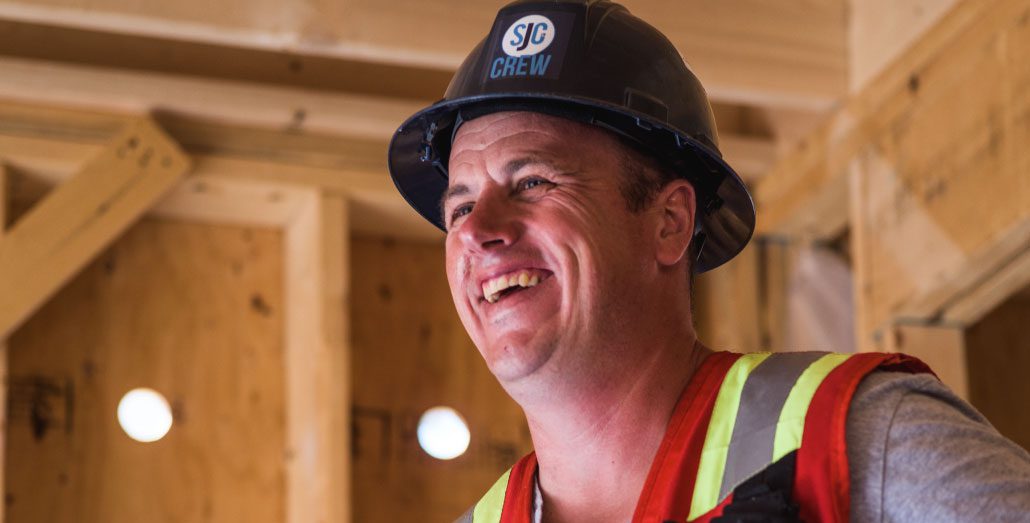 We met Shamus from Shamus Jones Construction on a site in Ladner, British Columbia to learn more about him, his company, and his long-standing partnership with The Skilled Trades Employment Program (STEP). With 25 carpenters and 30 sub-trades on the team, Shamus is working to give his employees the best opportunities while also planning for a stronger BC construction industry. Shamus has been a long-time supporter of apprenticeships and competitive pay. We asked him questions and he answered them. Read on.

What’s the biggest challenge for you as an employer in the BC construction industry?

How would you describe Shamus Jones Construction as an employer?

SJ: “I know we’re one of the few guys offering apprenticeships for red seal in a multi-family situation. We’re trying to pay competitive wages or above competitive wages. We also offer benefits to keep these guys. Once they start having families, that’s when it becomes really important to them to supply benefits, holidays and look after our guys. It’s really a big thing to me. It’s not really just about getting the work done, these guys have to go home. They have to go home safe because they have to come back the next day.”

How has the Skilled Trades Employment Program (STEP) helped your company?

SJ: “With STEP it’s easy because I can talk to my representative. He’s in the know, he’s in the touch. He knows what I’m looking for. He’s starting the hiring process for us. He’s cutting out some of the guys who may not be suited for this job or suited for another trade. With the STEP program we’re getting guys who actually want to be tradesmen, instead of somebody just looking for a pay cheque.”

How long have you been working with the STEP program?

SJ: “I’ve been working with STEP for 5 years and had 25 placements within that time, some of which are now second years going on third years and we have one third year STEP graduate. We’re getting really close to finally getting our first Red Seal through STEP.”

Would you recommend STEP to other employers?

SJ: “No, it’s my secret! Just kidding. I have recommended STEP to other employers – some of my friends own concrete companies. It’s a viable source because we’re getting an inside track.”