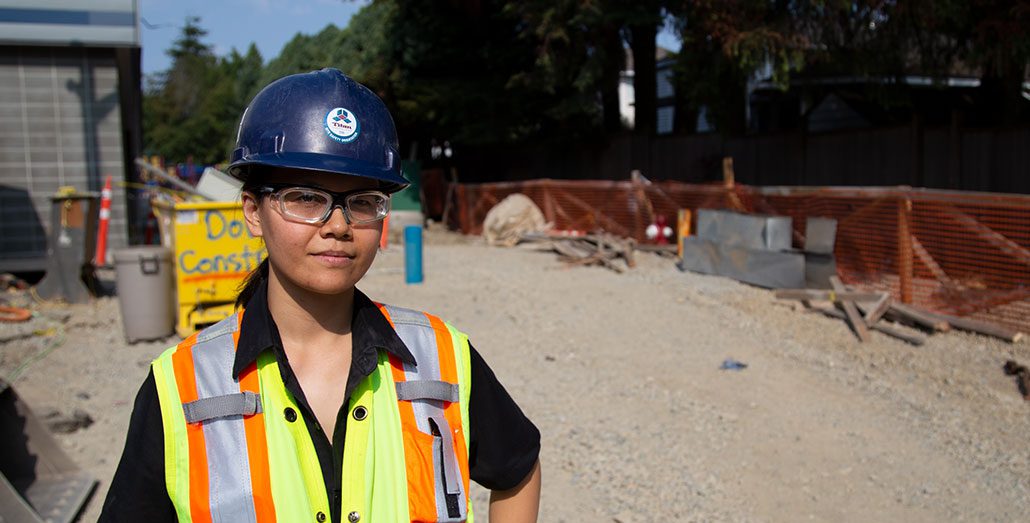 Weiny’s work ethic and dedication could be attributed to the fact that she knows what she wants. She wanted a career in the trades. She worked hard to get there, and she plans to work even harder while she’s here.

“For myself, I knew I wanted to get into the trades. I was very specific about what I wanted to get into,” says Weiny. “I got exactly what I was looking for with STEP – my case was very specific. My STEP REPS was amazing. He helped me through a lot. I was able to touch up my resume and find an employer that has my needs and I have what they need.”

The case was unique, so STEP’s Regional Employment Placement Specialist (REPS) Kyle worked with his connections to find the right fit. Weiny knew her path would be in the electrical trade. Coming from Ontario, Weiny had completed an electrical training course years before, but had never had the opportunity to work in the trade.

“That can make it difficult to find work in a competitive trade, and electrical is the most competitive,” says Kyle. “The other issue was her out-of-province training was not ITA accredited. This meant it may or may not count for a Level 1 of the technical training.” Kyle had been in touch with Pacificom Integration weeks before meeting Weiny. He knew they were looking to hire but struggling to fill positions for the security/data & communications team. This shortage of hires had increased the starting wages and Kyle knew it was a good opportunity.

“Security Systems Technician is an ITA recognized trade. SST/data & communications are similar to the electrical trade. They have a lot of overlapping training. I had a good feeling about it, so I asked Weiny if she was interested and she was,” says Kyle.

Pacificom Integration welcomed the opportunity to sponsor Weiny as a Security Systems Technician Apprentice while also sharing her work with the electrical division when needed.

“This would allow her to learn both trades,” says Kyle. And learning both trades keeps Weiny busy and driven – just the way she likes it.

“It’s a combination of using your brains and the physicality of it. You’re learning something new every day. There’s no shortage of work, let’s say that. It’s exciting. It’s something that drives me to be a better worker,” says Weiny.

It wasn’t long before Pacificom Integration sponsored Weiny as a Construction Electrician Apprentice too.

Weiny is thankful to STEP for finding the opportunity with Pacificom Integration and setting her up for success with the right Personal Protective Equipment (PPE) and tools to ensure she was job-ready from day one.

When giving guidance to others, Weiny has three pieces of advice: “Thanks to STEP, I was able to hit the ground running with Pacificom and here I am. I’m doing what I wanted to do. I would tell others: Do your best. You’re smarter than you know. Don’t be afraid to take the first step.”